SKG Radiology continues to treat the current COVID-19 risks very seriously. The welfare of patients and staff is our first priority and we have policies and procedures in place to ensure their safety. SKG Radiology will continue to follow the WA Health Department guidelines and requirements

Please ask our staff for more information about these requirements and/or Medicare eligible bulk billed services.

If you are currently under a direction to isolate/quarantine for COVID-19, we will be unable to perform your examination. Please advise our staff so we can schedule your appointment for after this period. 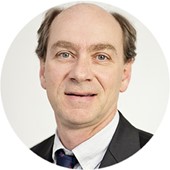 Dr. Nicholas Wambeek graduated MBBS at the University of Western Australia in 1985. He initially specialised as an Emergency Physician receiving his FACEM in 1992. Dr. Wambeek subsequently trained as a Radiologist in the West Australian training scheme receiving his FRANZCR in 1998.

He undertook Fellowship training in Musculoskeletal and Neuroradiology at Vancouver Hospital and Health Sciences Centre and the University of British Colombia, Canada.

Dr. Wambeek holds a public hospital appointment at Fiona Stanley Hospital and is a former Deputy Head of Department, and Director of the MRI Unit at Fremantle Hospital. He is head of MSK Radiology Fellowship Training at SKG Radiology, Chair of the Clinical Standards Committee and a member of the Practice Executive Committee. He is a current Examiner for the Royal Australasian and New Zealand College of Radiologists.

Dr. Wambeek joined SKG Radiology in 1999 and has interests in all aspects of General Radiology and a subsequent interest in Musculoskeletal Imaging.